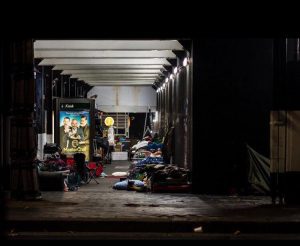 “You probably think I’m just another one of those homeless people. Just another bum sleeping on the street.”

This is how my new friend Matt reacted when we were introduced to each other recently. I have passed by many times through the laneway where Matt sleeps to get to the other side of my neighbourhood and we usually nod a hello but had never formally met. Everyone knows Matt. On his good days he is a keeper of the laneway, a concierge and a help to any lost tourist strolling the streets of my neighbourhood.  On his not so good days, when he is more disoriented, we notice it and the community struggles with his unhinged behaviour.

“No actually I don’t think that at all Matt” I answered him.

Immediately he realised that he had misinterpreted me. Or perhaps he was simply gently provoking me to get a reaction. Probably the latter I suspect.

We had a roundabout, random and pleasant conversation following this confronting yet cheeky introduction. We talked about art, politics, hashtags, family and friendship. It made me think again about how some people in my community are full of humour, stories, life and value yet they are often the people that we look past because they don’t fit into the well-crafted and polished narratives our society spins. We would probably prefer to sweep these people under the carpet if we could. I’m thinking about the way that Rio prepared for the 2016 Olympics by getting rid of the favelas which were perceived as a nuisance and revealing of Brazil’s perennial struggle with poverty. I remember reading an article about the removal of the favelas that mentioned, “there was a sadness over what was vanishing.” People’s homes were being knocked down for the preparations of this international event. According to the powers that be, a more polished presentation of the city needed to be crafted.

I’ve been observing the “polishing” that is going on in my neighbourhood. A narrative of success, fashion, fun and prosperity is being presented in an attempt to portray and shape the community where I live. When this happens, more than ever do we need to hear the voices of those who might be drowned out by the choir of the privileged. We lose, weaken and grow smaller as a society when we ignore those who the Bible calls “the least of these” and “the weaker members”. We read in those sacred texts that when we take care of the least of these among us, we are in fact caring for Jesus himself in some inexplicable way, and when we pay attention to the weaker members, we grow stronger as a body and recognise our interdependence. We affect one another. So for instance, when Matt is doing well our community thrives, when he is not, our community notices and we must show care even in the midst of feeling perhaps annoyed, sometimes frightened and occasionally completely frustrated.

There was a sadness over what was vanishing.

When those with less privilege in our society “vanish”, we begin to vanish also. We become a worse representation of ourselves.

God help us to have the sensitivity to discern in our society the difference between the things that ultimately don’t matter, and the truly necessary things that must never vanish, lest we become inferior and uglier versions of ourselves.