Love thy Neighbour…or maybe just keep away from them. 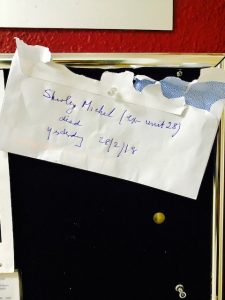 I took the elevator down to the ground floor of my building as usual. It shook a few times as it slid down the levels and I began to wonder if it would break down yet again. When I landed at the ground floor I walked past the hardly used noticeboard, but a scrap piece of paper caught my attention and made me walk back to take a closer look. It was a torn envelope and on it in spindly writing with a blue biro someone had written

I stared at it transfixed for a few moments. I knew right away that the “patriarch” of our building Tom, had put the notice up. Tom knows everything that goes on in our building which is home to at least a hundred people. He will often knock on my door to tell me that someone has been on the roof and that I should watch out, or that my mail has gone missing and that I should make sure I check it everyday, or that his cat has been in a fight again with the other alley cats. Sometimes he will do some good old-fashioned campaigning, knocking on the doors of all the people he knows in the units of our building before a strata meeting, to make sure his agenda will be heard and followed. Tom is old. He told me once that he used to be a chess champion and university professor. He looks a little wild when you first encounter him, but he is very kind.

However, I had no idea who Shirley was.

I was struck by the death of someone in my building, the very place where I live, and that I did not know who she was. I asked Tom about her and he told me a little about her life. I wondered if she had died alone, had family or what kind of life she had lived in her tiny unit of our shared building which houses many older single people.

Of course these days it’s completely normal to be strangers to our neighbours. It’s forgivable and understandable to not know everyone who lives in your building which could have many people living in it. How are we supposed to keep track of all the names for instance?

It also seems like people are increasingly irritated by their neighbours.

A recent article in a real estate website titled “The Best Plants and Screens to Block out your Neighbours” provided tips and wisdom about how to avoid those pesky neighbours who sticky beak into your backyard, play their music too loud or just don’t know when to go away. One bit of advice was to grow “natural barriers” like plants and shrubs to keep distance from those who live next door. I even discovered that there is a type of lilly pilly called “Neighbours-Be-Gone” which functions as a “screening plant”. Suggestions in this article were also to block out any annoying noise that comes from those we live next too, by having water fountains or chimes in your backyard.

I understand that neighbours can be annoying, play music too loud and be intrusive. I have experienced that. But should we be encouraging people to put screens, barriers and fences up all in order to avoid each other? Should shrubs be given names like Neighbours-Be-Gone? Should real estate agents and industries thrive on helping people to distance themselves from each other?

A very well known and loved verse in the Bible says “Love your neighbour as you love yourself“. Jesus said it was the second commandment after loving God. What would happen if we took this second commandment literally? We so often talk about love, connection and the desire for companionship. We know that our neighbourhoods are filled with people who are lonely, die alone, sometimes unrecognised by those who live next door to them. It may be that neighbours can be annoying, but most of us seem to want to live in a place where people trust each other and look out for each other. That won’t happen with screening plants and wind chimes to scare off those who live with us in our shared spaces. It won’t happen with intentional plans made to separate ourselves from each other. When we take steps to getting to know one another and letting down our barriers, it is risky, vulnerable and can become irritating but it is much better than living in a society where people die alone in units and no one seems to know who they were or even their names. We need intentionality around building connections, welcoming people to our tables and unlearning bad habits of individualism and fear. We need to re-learn the art of neighbouring, civility and friendship for the sake of our neighbourhoods and the greater society.

I’m thankful for dedicated people like Tom in my building who keeps all of us accountable to our humanity. I hope that people like him continue to be around in a society that is ageing, fragmented and increasingly needing connectivity and relationships. Loving our neighbour means getting used to the mess of life as we bump into each other and our real selves clash with one another. It’s the harder road but one that I think is worth it if we want to build the society that most of us are longing for.

(My Book on Urban Spirituality: Embodying God’s Mission in the Neighbourhood will be out very soon. Watch this space for updates.)