This recent photo caught my attention.

It is of 16-year-old Lucie Myslíková, a girl scout who is standing up to a rightwing demonstrator a May Day rally held by neo-Nazis  in the Czech Republic’s second biggest city.

It reminded me of this photo also taken recently. 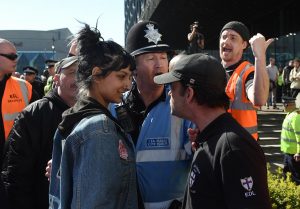 And now this iconic one. 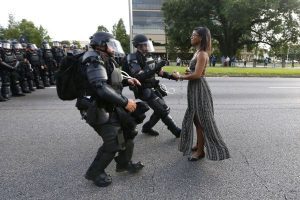 Together they portray a powerful montage of what it looks like to practice peace. Whether we are dialoging with someone who has a different view to us, standing up against a bully or resisting a show of unwarranted strength, these portraits inspire us to think about the best that humanity has to offer our world.

The Celtic Daily Prayer book helpfully explains that being a peace-maker is not about avoiding conflict, but engaging with the tension in a different mindset. To practice peace-making is to be a “remedy finder; bridge-builder; breach-repairer; a new-way maker; a relationship broker.”

We need reminders today of the good that resides in humanity because we live in an increasingly polarised world. As we are forced by the culture of today to take sides, our temptation is to dehumanise the other. What happens then, is instead of increased connection, our positions harden which only exacerbates our differences rather than finding the common ground we share.

Some of the worst examples of this are online in social media forums.

Jonathan Merritt in a recent blog about the recent uproar over Jen Hatmaker’s position on gay relationships wrote;

Does someone somewhere have a list of the nastiest character assassination attempts committed since the advent of the internet? And, if so, how many of the top spots are occupied by evangelical Christians? I think of evangelical pastor John Piper actually believing he had the authority to excommunicate then-pastor Rob Bell via Twitter because Bell questioned traditional notions of hell. I think of the backlash against World Vision’s president Richard Stearns when his organization announced it would hire gay Christians. I think of Jerry Falwell Jr. insinuating Southern Baptist leader Russell Moore was a “closet liberal” because Moore refused to support Donald Trump.

How do we practice peace-making in a polarised world, especially through our conversations? Here are a few thoughts to consider.

All are made in the image of God

That means paying special attention to “the other” who is made in the image of God. We often marginalise and fail to honour these people. Christine Pohl in Making Room writes about the Christian expression of hospitality which specially practices honouring the weaker members of society. She says;

Although we often think of hospitality as a tame and pleasant practice, Christian hospitality has always had a subversive countercultural dimension. “Hospitality is resistance”. Especially when the larger society disregards or dishonours certain persons, small acts of respect and welcome are potent far beyond themselves. They point to a different system of values and an alternate model of relationships.

It also means understanding that when those who are marginalised, oppressed and downtrodden speak peace or engage in peaceful acts of justice, it can sometimes look like violence to a privileged person.

We need to practice this kind of hospitality and self-awareness in our conversations today.

“Permeable boundaries” and “On the edge of inside”

Miroslav Volf in A Public Faith tells us that the boundaries which define us must be “soft” as opposed to hardline so that mutual respect and creative opportunities emerge through dialogue;

With such (permeable) boundaries, encounters with others don’t serve only to assert our position and claim our territory; they are also occasions to learn and teach, to be enriched and to enrich, to come to new agreements and maybe reinforce the old ones, and to dream up new possibilities and explore new paths. This kind of permeability of religious individuals and communities when they engage one another presupposes a basically positive attitude toward the other- an attitude in sync with the command to love the neighbour and, perhaps especially, to love the enemy.

Writer for the New York Times and cultural commentator David Brooks advocates that instead of holding to hardline views and taking sides, we become people who are on “the edge of inside.” These are people who are neither on the outside of their group nor on the inside. As a result they are on the edge of inside. These are doorkeepers and are able to simultaneously understand the dynamics of their group, offer critique as well as learn from alternate groups even though they might be in disagreement with them. He quotes Franciscan priest Richard Rohr;

A person at the edge of inside can see what’s good about the group and what’s good about rival groups. Rohr writes, “A doorkeeper must love both the inside and the outside of his or her group, and know how to move between these two loves.”

Brene Brown in Daring Greatly writes about an unfortunate attitude that exists in our world;

Either you’re a victim in life-a sucker or a loser who’s always being taken advantage of and can’t hold your own-or you’re a viking- someone who sees the threat of being victimized as a constant so you stay in control you dominate you exert power over things, and you never show vulnerability.

Many of us come to conversations with those who hold different positions to us with this kind of mentality. We want to win, show-off our knowledge and exert our power. We can also sometimes sneer at those we feel superior to which contributes to mistrust and further walls being built up between people. Instead, how can we practice empathy, vulnerability and teachability in our dialogues with those who we disagree with?

Peace-making is an important practice in our increasingly polarised world and it will take all of us to engage with this activity if we are going to work together to build community, relationships and further understanding between people who we disagree strongly with. In a world where “networking”, online forums and connecting are so important, how do we practice authenticity, friendship and hospitality even across sometimes seemingly impossible boundaries?