Re-enchantment, Incarnation and Sacred Spaces in the Neighbourhood 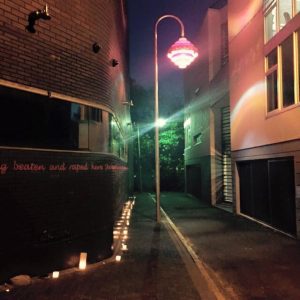 This is a lane with a name and a lamp in memory of the woman who survived being beaten and raped here. She happened to be lesbian. When the sun sets this lamp keeps vigil along with you who read this in silent meditation.

I stood there and read those words on a lane in the inner city streets of Sydney. They are painted beautifully in red on the wall of a hotel as part of a city of Sydney artwork commissioned to remember a horrible event that occurred in that laneway. I thought to myself “Why would the people in our city want to permanently remember such a ghastly, violent act”?

The story goes that a woman named Mary was brutally gang raped at this lane. Later on it was discovered that people in nearby units and houses had heard her cries but did nothing about it. The neighborhood and the city council were appalled by this and wanted to pay respect to the victim as well as reclaim the streets as a safe place. Community groups got together and commissioned an artist to create a work which would honor Mary, victims of violence and which would remind the community that violence is never acceptable in this neighborhood. So Mary’s Lane was created. The writing was written on the wall and a beautiful lamp was designed to light the dark alleyway confronting passers-by with the cruelty that sits in humanity while also reminding them of the hope that human beings are capable of.

The longer I paused there at that lane, the more I understood why the people in this neighborhood wanted to remember this unspeakable act. The more I thought about what happened, the deeper my awe for that neighborhood became. As I reflected on the story of Mary and the way the community had decided to honor her, I realized something: An act of ‘re-Enchantment’ had occurred in this community.

In Phillip Sheldrake’s book The Spiritual City: Theology, Spirituality and the Urban, he mentions a few ways that solidarity among strangers can be built. This he argues, is most of all important in cities which have a reputation for and a habit of representing loneliness, isolation, crime and disparity of wealth. One concept for building solidarity in the city that fascinated me was the notion of ‘re-enchantment’. He defines it like this: “Re-enchantment seeks to make public space more than a context for human socialization created purely by consumerism or tourism. Rather, we should work imaginatively and experimentally with public space to make it the medium for a transformation of imagination and behavior through protest gatherings (non-legislative politics), art, education and entertainment.”

I think there is something spiritual in that. And I think that’s what I discern in Mary’s story. A horrendous act was perpetrated by violent men, but instead of turning its back again, a community came together to build a memorial which would function as a sacred space — a reminder of the deep worth and respect we must have for all human beings. The hope, presumably, was that all who pass by would be encouraged to practice peace, hospitality and mutual honor rather than the violence illustrated in the crime. This is not simply a gruesome reminder of an atrocious act — the memorial carries a vision for transformation. The community used their collective imagination in order to change neighborhood behavior, and in that process, a sacred space was created on the streets of Sydney.

Charles Taylor, in A Secular Age, argued that as a result of the Enlightenment, the West now existed in a state of ‘disenchantment’ whereby everything sacred has virtually been removed from the daily stuff of life. He says “The presence of something beyond (what we call today) the ‘natural’ is more palpable and immediate, one might say physical, in an enchanted age. The sacred in the strong sense, which marks out certain people, times, places and actions, in distinctions to all others as profane, is by its very nature localizable, and its place is clearly marked out in ritual and sacred geography. This is what we sense and often regret the passing of, when we contemplate the medieval cathedral”.

However, what I see in the story of Mary is an example of re-enchantment. The difference in this story and others today, though, is that sacred space is not experienced in the cathedrals, churches and other normally “holy” places. Instead, it’s on the streets, lanes, alleyways, cafes, pubs and bars of the city. Christendom gave us cathedrals as sacred spaces in contrast to the profane, but in a society which is post-Christendom, we more clearly see that the sacred spills out onto the streets, mixing with the horror and beauty of humanity. The holy mixes with the profane, heaven touches dirt, and peace mingles with turbulence. In essence this is the ‘enchanting’ truth of the incarnation. The most stirring realization we can have is that the Holy merged with fleshly, sinful humanity and co-existed.

Where are the sacred spaces in our communities today? Or to quote a much repeated phrase these days “Where can we discern God at work in our neighborhood?” How can we join with our neighbors to create sacred spaces that will remind us of our humanity and our desperate need to turn our faces towards God and each other? Most importantly, what does it look like to discern and convey a theology of the incarnation in the sacred spaces we identify and create? This is crucial for our missional witness.

Briefly, I would suggest that if we want to identify and create sacred spaces with a perspective from the theology of the incarnation, we need to consider three things.

First, sacred spaces embody the particular. In the same way that Christ was limited to flesh, history, time and a geographical location, sacred spaces convey the particular, the individual and the ordinary (rather than conveying the abstract in a conceptual manner). Mary’s story is about one woman who suffered an abominable violent act in a particular place and time. This creates a localized and particular narrative which tells what might be a horrible story yet ultimately conveys redemption.

Second, sacred spaces exhibit a meshing of the holiness and ugliness of humanity. In the incarnation, ultimately we see the Holy One of God dying a violent death on a cursed cross for the sake of this world. There is both an ugliness and beauty in that. In Mary’s story I see the community recognizing the worth of a life, perhaps even intuitively seeing the image of God in a person. I hear a cry from the neighborhood that violence is unacceptable in this world and a refusal to become accustomed to it. I even discern a longing for justice and a desire for perhaps another world, maybe even the kingdom of God.

Finally, sacred spaces are transformative. We enter into sacred spaces to be confronted in order for transformation to happen. Instead of comfort, we need challenge. Rather than a reinforcement of the status quo, we want change. Instead of peace, we look to be disturbed and disrupted so that we might embody a better reality.

May we be a church which is discerning of God’s work in the neighborhood. May we discern the partial truth that sits in many sacred spaces on our streets, parks, laneways and other public spaces. And then may we proclaim and live out the fulfillment of that truth reflected through the Holy One in our midst, the one who touched and embodied human flesh so that any ugly things in us might become beautiful.