The Subversive Act of Hugging 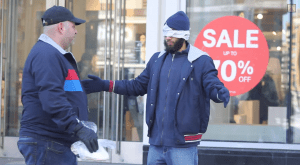 Sometimes it’s the smallest things that can undermine a whole social system.

There is a video on social media of a Muslim man who stands on the street blindfolded, arms outstretched, with a sign at his feet that reads;

I’m Muslim and people call me a terrorist. Do you trust me? If yes hug me.

He stands there waiting for people to approach him. Slowly people take turns in embracing the man. Older men, younger women, children, all initiate hugs. Then we see a woman holding a newborn baby approach him and hug him, a man in a wheelchair hugs him. It’s incredibly heart-warming to watch.

It’s an old clip. Many of us have seen this kind of thing before. But the video is doing the rounds now, because yet again we need to think about our common humanity in the face of prejudice and violence.

Again we need to be reminded that we have nothing to fear from those who are different to us.

And so this clip appearing on our screens in these times, cancels out some of the hatred that we are used to seeing in our society.

It has made me think about how subversive an everyday and common act like hugging, can actually be.

The hug here is firstly a protest. It is a protest against our climate of caution, fear and moreover, a sometimes clinical approach to building community. Hugging someone is about accepting, welcoming and is an embodied illustration of hospitality. Secondly, to hug requires an essential element for building trust between people and that is vulnerability. The blindfolded Muslim man shows his vulnerability by exposing himself to a world that can be cruel. He puts himself out there to the world not knowing what response he will get. In the fragile and simmering with tensions environment that we live in today, who knows what could happen? He is exposing himself to abuse and possibly physical danger. The person who walks by him must also show vulnerability because he or she must decide whether the Muslim man who they don’t know, can in fact be trusted. Do they trust all the reports on the news which tell us to be suspicious or do they accept the hug from a stranger? The choice is up to the bystander.

Lastly, there is a third element present in this theatre of the streets. What of those who pass by watching this subversive and poetic drama? Why do they choose to watch and not participate? What if the Muslim man was in danger and being abused? Would those who walk by mediate and protect this vulnerable  stranger now in trouble? Maybe those who walk by unaffected are victims of the status quo which tells us to avoid attempts at reconciliation and instead build walls in order to protect ourselves. The subversive act of hugging cannot in this case penetrate the blanket of terror that that deceitfully promises to shield them from danger.

But there are those who hug. They are the ones who are part of the resistance, refusing to let the culture of hate fashion them into haters. We must continue to initiate, engage and share in these mundane yet subversive acts from everyday artists that poke holes in the layers of prejudice building in our world today.

There are those who hug. And for that reason, there is hope in our world today.