The Shame of Loneliness 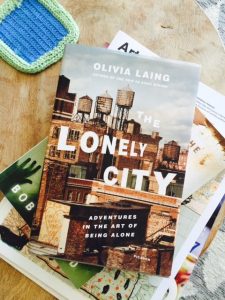 I am prone to feelings of loneliness.

It’s not because I’m single, I’m quick to add I realise. I used to feel this way even when I had that “special someone” in my life. I feel it when I am alone and also when I am surrounded by people. I don’t feel it all of the time but only sometimes. I often wonder if others experience these feelings but it seems like it’s not something that we talk about very much today. Yet it is, we are told, what many people feel as a part of their daily existence.

What is it about loneliness that makes it hard to talk about?  Are we supposed to present to the world a mask to pretend we have it all together? Do married people feel as they they are letting their partner down if they admit they are lonely? Do religious people avoid talking about it because their  God is supposed to fulfil any existential angst they might have?

But many people privately, tell me they feel lonely.

It seems like it’s more socially acceptable to talk about mental illness such as anxiety and depression today but we still struggle with admitting loneliness.

I’m reading a book called The Lonely City by Olivia Laing and it’s increasing my fascination with loneliness.

What makes us feel lonely?

Laing defines loneliness as “proximity without intimacy” and I think that this is probably true. We feel most lonely not when we are alone, because we all know that we can feel this way even in a crowded room. We feel lonely when, regardless of our circumstances, we crave intimacy but we can’t get it either because it is denied to us or we sabotage our own attempts to reach out.

I think about this a lot because I live in the city, a place where people are in close proximity yet lack intimacy. I watch a lot of people walk the streets of my inner-city neighbourhood who look like they are lonely. They walk with eyes to the ground and seem as if they have forgotten how to connect.  When I see them, these lonely people, I wonder again about this social disorder that is so hard to define and navigate.

Is it something to avoid and crush or to embrace?

Loneliness can sometimes be a force for creativity. No one knows if Edward Hopper experienced bouts of loneliness but he did once say, “The man’s the work. Something doesn’t come out of nothing”. Were his paintings expressions of his loneliness? 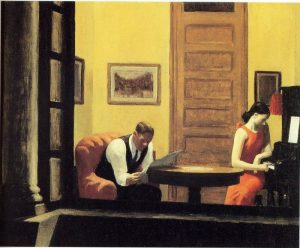 I’ve always loved his paintings and viewed them as portraits of loneliness and emotional isolation. Woman standing alone in a city unit looking out the window. Men sitting in their office daydreaming, maybe longing for something more. Couples in close proximity but seemingly distant from each other. His images reveal bottled up desire, the ache of missed opportunities and prove that whether we are alone or even with others who know us, we are always, in essence, strangers to each other.

But loneliness works as a destructive force too. Laing says;

“When people enter into an experience of loneliness, they trigger what psychologists call hyper vigilance for social threat..In this state which is entered into unknowingly, the individual tends to experience the world in increasingly negative terms, and to both expect and remember instances of rudeness, rejection and abrasion, giving them greater weight and prominence than other, more benign or friendlier interactions. This creates of course a vicious circle, in which the lonely person grows increasingly more isolated suspicious and withdrawn…What this means is that the lonelier a person gets, the less adept they become at navigating social currents. Loneliness grows around them like a fur, a prophylactic that inhibits contact, no matter how badly contact is desired.”

And we know about they physical effects of loneliness. Stress, sleeplessness, cognitive decline, a weakened immune system, a rapid path to an early death. Psychologists say that loneliness can be more damaging than depression, loss or anxiety.

One woman trying to express her feelings of loneliness said,

I don’t know why people think of hell as a place where there is heat and where warm fires are burning. That is not hell. Hell is if you are frozen in isolation into a block of ice. That is where I have been.

But what I find the most interesting is the association between shame and loneliness. Laing calls loneliness “the most shameful of feelings”. In other words, no one wants to talk about feeling lonely, it’s a social taboo. If you are lonely, somehow, it’s your fault. We pity the lonely, but we don’t want to know them.

Loneliness disorients me but also points to the truth that there is an innate absence in our lives which was meant to be filled by a Presence. This is something we might not experience fully in this lifetime.

But talking about it somehow shakes the spooks away. It somehow feels quite human to talk about this most human of conditions, even through the shame. As the hidden “demon” comes to light and I stare it in the face I am strengthened and made more confident knowing that I may, and probably will, encounter it at some stage, in some small, or big and maybe confronting way during the course of the day.