There’s something about Mary 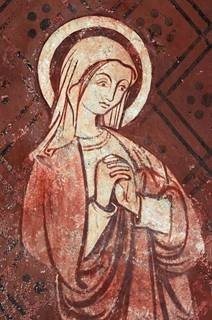 To tell you the truth I’ve never really been that interested in Mary…but you have to admit there is something about her, the mother of Jesus that is, that quietly and persistently challenges you to take another look at this woman. So as a result, lately I’ve been thinking a lot about Mary, and especially wondering if she has anything to say to us about women in leadership today.
The problem with Mary of course is the way that she has been ‘interpreted’ by biblical scholars throughout history.Generally there have been two broad perspectives on this woman.Firstly there is one tradition that almost treats her as a goddess. Mary is seen as almost divine, most certainly a saint and a woman to be adored, worshiped and definitely not exactly human. She is a woman above the rest of us and not able to be emulated. You see this coming through of course in Catholic theology to some extent and this view is very visible through art in history. 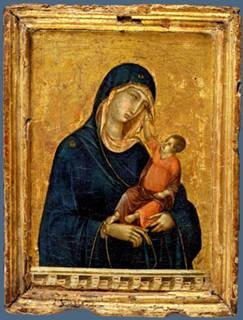 If you have a look at this painting by the well known artist Duccio di Buoninsegna who was painting in around the 1300’s, even though he was known for ‘humanising’ his subjects you still don’t get a sense that Mary is entirely human from this painting. She is something other than us, not an ordinary woman and therefore should not be seen or treated like one. She is to be respected, admired and worshiped.
The other view is the opposite and it comes from within some parts of the evangelical tradition. Maybe it’s based on a reaction to the former view or a fear that Mary might be seen as divine but this view treats Mary as a mere vessel. Here she is seen as a mere carrier of God but not important in and of herself. In this interpretation of Mary she is nullified and made invisible. I sensed this a little when I spoke at a church on the topic of having vision and purpose in your life and I used Mary as an example for our encouragement. The group I was speaking to was made up of men and women and a man came up to me at the end of the talk and said that it was interesting to hear a message on women in leadership. As far as I knew I had not spoken at all in the message about women in leadership. I was simply using Mary as a role model for Christians – men and women, for helping us to discover our purpose in life since Mary had been given such a crucial one by God.
It made me realise that the norm is to use men as examples of the biblical heros of the faith in messages to mixed gender congregations. The implication being that you use women in the Bible as role models for faith if you are speaking at women’s gatherings. The comment this man made showed that he had never viewed Mary perhaps as a role model for his faith. She was a carrier of God but was she important enough to this man to be seen as an example for him in his daily walk with God?
There are of course exceptions and deviations from this. I value Leon Morris’ observation who in his commentary on Luke says about Mary’s response after she had accepted her extraordinary and daunting purpose given to her by God, ‘We are apt to take this as the most natural thing and accordingly we miss Mary’s quiet heroism’.
How is this relevant to us today?
I think that society does the same thing to women. Women are either treated as either ‘goddesses’ to be worshiped, mysterious and hard to understand or on the other hand they are treated as mere vessels that is, carriers of children, supporters to husbands but not important in and of themselves. Society still gets it wrong about women. One example is the recent failed marketing ploy by Bic to put out onto the market special pens for women. Women responded in anger, humour and cynicism wondering why special pens needed to be designed for women and anyway what exactly was a pen for a woman supposed to look like? One reviewer on the Amazon website sarcastically commented
‘Finally!
Someone has answered my gentle prayers and FINALLY designed a pen that I can use all month long! I use it when I’m swimming, riding a horse, walking on the beach and doing yoga. It’s comfortable, leak-proof, non-slip and it makes me feel so feminine and pretty! Since I’ve begun using these pens, men have found me more attractive and approchable. It has given me soft skin and manageable hair and it has really given me the self-esteem I needed to start a book club and flirt with the bag-boy at my local market. My drawings of kittens and ponies have improved,
Where has this pen been all my life???’