There’s room for everyone at the feminist table 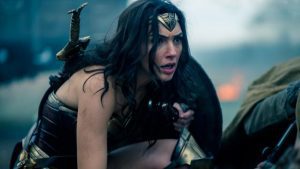 I have a friend who is in her mid twenties and she is strong, independent, intelligent, well-read and sassy.

So it fascinated me when she told me that she loved the new Wonder Woman movie. What she liked was the way that Wonder woman was portrayed; beautiful, kind, smart, only using violence in order to protect herself and she is independent.

It has made me wonder about how we define feminism. Why is it that my friend who by all accounts thinks and acts like a feminist, hates the label and won’t use it for herself?

The movie has been controversial. Some critique the fact that Wonder Woman’s beauty is a key feature and that she is a model, therefore mere eye candy for the viewer. Others have seen issues with the lack of sensitivity to intersectionality. In other words, issues that intersect with feminism such as race, class, ethnicity and ability are ignored. Layered onto this is the fact that the actress Gal Gadot is a known Zionist and many have found it problematic that a feminist icon like Wonder Woman can be portrayed by a woman who agrees to the violent subjugation of a nation.

Is it possible to openly call for the death of women in a neighboring state, to support a political and economic regime that without a doubt contributes to their subjugation both at the hands of Israel, and in Palestinian society, and still be a feminist?

For me, the answer has to be yes, because feminism is a broad church.

Susan Carland who is a Muslim feminist and has recently published a book Fighting Hislam, said at her book launch that many people she speaks to cannot conceive of the possibility that there are Muslim women who are feminist. Is this because we have not made room at the feminist table for Muslim women? Have we defined feminism too narrowly? At one point of the book launch she took a cheeky slight shot at the second wave of feminism represented by Eva Cox who was sitting in the audience. It was all in done in a good natured way to again reinforce there is room for everyone on the table when it comes to fighting sexism.

Recently there was an uproar about Prime Minister Theresa May’s legs in the media. There was a photo taken of the Prime Minister and Nicola Sturgeon in a meeting negotiating Scotland’s role in Brexit which was a feature in the Daily Mail. Instead of the focus being on their high level discussions, the photo centred on the elegantly paired, crossed legs of the women. Many people including myself saw the focus as sexist. However, other well known feminists thought it was a bit of fun. ABC Breakfast news presenter Virginia Trioli thought that there was no problem in highlighting May’s excellent figure, neither did outspoken radio presenter Libbi Gorr. Is there room on the feminist table for women who think that revealing a woman’s beauty is a natural and normal thing to do? Some feminists would think not.

Getting back to my sassy, young, intelligent friend who loved Wonder Woman yet hates feminism. How can we include women and men at the feminist table even though they might not espouse a particular brand of feminism? The intersectionality debate is contributing to this discussion which is helpful, yet I find that this debate often seems like it is setting up it’s own brand of feminism, often excluding women in religion and different theologies for example.

This is not to say that there should not be a debate around the nature of feminism or that boundaries should not be placed around the term. I struggle like many people, reading Gadot’s militant tweets which reflect her Zionist tendencies. I also ask, “How can a woman who believes in the suppression of others be a feminist?” But unless we are going to make the feminist table very small indeed , then we had better listen to these voices of women and also men who are feeling left out of the conversation.

And by the way, like many women, I also loved the new Wonder Woman movie. I saw some of myself in her, as do numerous other women today. That’s what icons do. They hopefully reveal our best selves as we gaze into them and see some of our reflection there. There have been too many modernist takes on this film which drain it of any magic that a movie like this is supposed to make us feel as we watch it. Maybe she is a feminist icon to some, maybe not to others however, she is someone who gives women inspiration, courage and kick-ass determination to keep persisting in life to boot.