Today I walked my neighbourhood with my  six year old niece.

But she stopped frequently to take photos of flowers.

At one part of our photographic journey, she was taking a photo of some beautiful, red flowers in the front yard of a terrace house when suddenly, the owner walked out.  She was a little old lady about to leave her home and on her way to church that morning. She smiled at me. I told her that my niece loved her flowers. She looked at me and then spoke with tears in her eyes. She told me that just the other night some vandals had come and completely destroyed her large flower pot with some spectacular plants that she had been growing for years. As she told me about this horrible incident she said “You know, I felt like a piece of my heart had been torn out when I saw my destroyed plants. Why would someone do such a thing?”

“I don’t know” I offered helplessly.

That’s what I’d call people who instead of increasing the beauty in our world, work for its destruction.

I think there are a lot of beauty vandals today. When I read my newsfeed these days, I see violence, lies, selfishness and a lust for war, all which make me ask the same question that this little old lady asked me “Why would someone do such things?”

A few days ago I was reminded of this image taken by Susan Meiselas during the Nicaraguan revolution in 1979. It became propaganda used to mock the corrupt Somoza government and gave power to the Sandinista uprising against the establishment. This man in the photo became a symbol of power, radical postures, machismo and freedom. 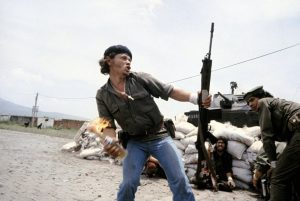 (Though I found out recently that he was wearing women’s jeans in this photo. Go figure).

I grew up on a narrative that extolled radicals like this. My virtues illustrated phrases such as;

“Bring freedom to the people”.

I am naturally drawn to these kinds of seductive revolutionary slogans and practices.

But today this heart-broken neighbour made me think about an alternative. This well-known counter-image came to mind. 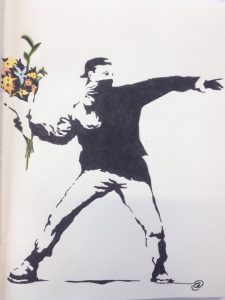 Instead of throwing words that sow destruction in our world how can we throw flower bombs instead?

The image is ludicrous of course and it is meant to be. Who throws flower bombs? What would be the point? We throw verbal and physical bombs of violence because we think that is what will cause change. But instead of fighting darkness with more darkness what if we fought the dark with beauty and light?

We draw people to Christ not by loudly discrediting what they believe, by telling them how wrong they are and how right we are, but by showing them a light that is so lovely that they want with all their hearts to know the source of it.

“Showing people a light so lovely”. She knew about flower bombs.

That’s what I am going to try and “throw” these days of increasing confusion, polarisation and disorientation. Words that reflect beauty, grace and truth, not words that sow more destruction, hate and division.

This is what it means to be part of the “resistance” that we speak of today. It looks more like the second image than the first, though many of us might think the first image makes more sense intuitively.

The second picture runs counter to the violence in us and brings forth the work of the One who shapes us into a better image. An image we all deeply long for that ultimately, brings healing to our world.

I hope you can join me.