My heart sank when I read the news story which a friend emailed me. ‘Could this be Matty?” he asked. I skimmed the story and tried to work out when the last time was that I had seen him. I was pretty sure that I had seen him since the tragedy that I was reading about had happened, so I felt a bit of relief.

The story that was in the papers this week was about a garbage truck driver that had accidentally run over a homeless man who was sleeping on a dirty mattress on Bourke Lane in Redfern. The accident happened last year but the trial was this week and the truck driver was acquitted of negligent driving. The driver had thought it was simply a pile of blankets in the laneway and was devastated to find there was a human being lying there. The man who was run over was Mathew Hayne and the accident happened just down the road from where I live. I had thought that it could have been another Matthew I know, “Matty”, who you can also often find sleeping in the laneways of my neighbourhood. So I was glad to hear it wasn’t him. However, the story left me feeling affected and deeply sad and I had to think about exactly why. 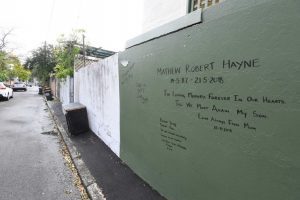 Of course it’s a horrible story from all angles. It’s a horrific tragedy for the person who was run over, the family, the truck driver and the council. Fingers can be pointed at anyone. Why was Mathew on the streets? Why could not the truck driver have been more careful? Why are people leaving mattresses in laneways? Is this a sign of the “affluence of Sydney” as the magistrate said? Could the council have stopped this by putting up more parking restrictions in those tight inner-city laneways? The blame can spin around like a whirlwind which we can get caught up in as we choose the victims and culprits in this fatal story.

However, what stood out for me was something that Mathew’s mother said when she was interviewed by reporters eager to get to the sad story through the woman who gave life to Mathew. She shared about how she had been looking for him, she told them about what a happy young boy he had been and then she said “He’s not a homeless man. He has a family and he is well loved.”

There are so many people who live and sleep on the streets in my neighbourhood. How many times have I used that expression, “homeless person” about them, without knowing the name of the one I am referring to even though I see them almost everyday? A friend corrected me once by telling me that I should be using the expression “the person who is experiencing homelessness”. However, I can still retreat into old habits and label a human being “homeless” without even bothering to look them in the eye, get to know them and find out their name.

It made me think about the invisibility of some people in our society. Even though this terrible story was an accident, it’s a sad reminder to me and makes me reflect on how a city like Sydney bypasses, marginalises and stigmatises the homeless community. Are we taking care of our most vulnerable? Do we see them or are they invisible to us?

According to the recent statistics homelessness in Sydney is up by 13 percent. This is the case even though this week we have been delivered a federal budget that is in surplus. The direct reason for the rise in homelessness is that there is a lack of affordable and low cost housing in the city. Sydney is pushing out those who cannot afford to live here. Will Sydney be a playground for only the well-off? We all lose living in a monochrome city curated for the rich, that is more homogenous and less diverse. Even though there has been more money going into affordable housing according to the government, the money is being put into maintaining current low-cost housing properties rather than creating new spaces and dwellings. This makes it look like we are helping those who cannot afford to live in Sydney and who need help with housing, when we are actually not.

What kind of society are we if we do not take care of “the least of these”?

In my book Urban Spirituality: Embodying God’s Mission in the Neighborhood I write:

As we pay special attention to those who are weaker, more vulnerable and marginalised neighbours in our community, we counter our society’s indifference towards these people. More than that, we might come across as “holy fools”. Sometimes when we take care of the things and people that others want to marginalise, we receive backlash because we are disturbing the norms in our society.

This quote from Untamed Hospitality by Elizabeth Newman is something I have reflected on to help me in this practice of paying attention to the “least of these”.

The faithful practice of hospitality must begin and also end with what our society will tend to reject as of little consequence. Waiting for the earthshaking event or the cultural or even ecclesial revolution can paralyse us. We are rather, as the gospel reminds us, called to be faithful in the small things. Hospitality is a practice and discipline that asks us to do what in the world’s eyes might seem inconsequential but from the perspective of the gospel is a manifestation of God’s kingdom.

I wonder if it would help in some small way to remember the words of Mathew’s mum, “He’s not a homeless man”. Would it help if we knew the names of those who we walk past everyday who are living on the streets or struggling to get housing in our sparkling city of Sydney? The city belongs to all of us. Can we see the invisible? Do they matter to us?