In this time of social isolation, physical distancing and people out of work, one good way to help out a neighbour is to support local businesses.

Locally-owned cafés, restaurants, grocery stores and other retailers are a crucial part of the ecology of the neighbourhood. Not only do they provide us with the things we need, but for some people they are the only point of social contact. Neighbours mingle in shops as they decide what to buy. In cafés and restaurants relationships are nurtured, business partnerships are formed and families and friends relax after a hard day’s work. And businesses shape the character of a community with their shopfronts and displays and colours and odours.

It’s made us sad to see so many local businesses now struggling, or even closing down, in our community.

There’s a café close to where we live, where we would sometimes meet friends for a cup of tea. Or have meetings. Or just sit with a tea for quiet reflection. Or have an omelette. Like many other cafés in our area, they are now offering takeaway.

So we had an idea: adopt-a-business.

We live in a large block of apartments. What if we were all intentional about buying just one takeaway coffee or lunch each week or even fortnight? This would help keep the café in business.

We approached the café manager and he was keen. We then dropped a simple flyer in the letterboxes of all the residents in our building to gauge interest in the idea before going ahead. 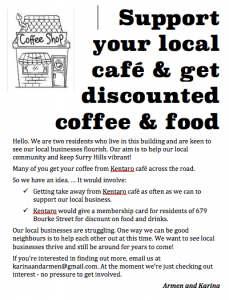 We heard back from one neighbour, who said she’s already trying to support the café by buying muffins. And when we went back to see the manager, he told us how a few of his customers from our building said they had seen the flyer. So we decided to go ahead.

The next step is that the manager will print copies of their menu and membership cards and place them in the letterboxes. They will be offering a 10% discount on drinks and 15% on food for residents of our building.

We learnt a few things from this:

There are others doing this, too – individuals, community organisations and churches. The ‘Love Your Neighbours’ initiative of St John’s Anglican Church at Diamond Creek in Victoria encourages members of the church to ‘adopt’ a local business for a year. And individuals and families of a United Church in Seattle, USA, are being encouraged to ‘Adopt a Restaurant’ in their neighbourhood.

Could this work in your neighbourhood? How would you implement something like ‘adopt-a-business’ in your community?

Let us know how you go!

Update: The café manager has done a letter box drop in our building. Here’s the flyer. 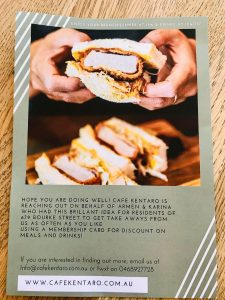 He messaged me today to say he’s already had a positive response, which is great news! Even though this season is a really tough and disturbing time for all of us, we can certainly see so many opportunities for practicing neighbouring. This is something we have been passionate about at Neighbourhood Matters. Here are ten tips from us and what we have been trying to practice. What would you add?

1. Schedule zoom or virtual meetings with neighbours over dinner or drinks. “Virtual drinks” can humanise a meeting and make it a bit more social.

2. Start small and see where it leads. For example, we will talk to the cafe across the road about an “adopt a business” idea between the units in our building and the cafe.

3. Check in on neighbours through letterbox drops or phone calls, messenger and regularly ask how they are doing. Offer help.

4. Offer to go for walks with neighbours. We need to do this one on one now that we can only be in public places in pairs (except for family and households).

5. Being cautious about what we post on social media. We want to be realistic but also hopeful. We try to take into account people from all walks of life and what they might be experiencing during this time.

6. Smiling when we walk past people on the street. Social distancing can make us feel awkward but it’s important to make the effort to reach out and help people feel a sense of ease during these anxious times.

7. Engaging in small acts of kindness on the spot, e.g. giving someone a grocery item if they can’t find it and you have it.

8. Doing a prayer walk and asking God to show you how you might reach out in creative ways.

9. Finding out what local community organisations like neighbourhood centres or Meals on Wheels are doing and offering help or support, e.g. working the phones or organising any activities that are needed. What are some groups that already exist in your community that you can join?

10. Keep your primary emphasis local so that when this season is over you will have built strong connections and fostered a resilient neighbourhood for the future. It’s a great time to do this. Throughout my adult life, I’ve been involved in a variety of welfare and community development organisations. Whether it’s helping at a lunchtime ‘drop-in’, setting up an overseas charity, coming alongside people at the margins of society or raising funds for people in need, it’s been rewarding to see needs met, relationships built and lives changed.

But I’ve also had niggling questions that continue to bother me: Are we building dignity or encouraging dependency? Are we helping or are we hurting?

Perhaps the underlying question in all of this is: How do we exercise power? Philosophers, social scientists and theologians have wrestled with this question for millennia. It’s an important question that challenges our practices in everything from politics to the workplace, from community organisations to families, and from religious institutions to relations between genders, races and different age groups.

Last September, World Vision, one of the world’s largest international non-government organisations, announced a switch in how it would run its child sponsorship programs:

Almost 1,000 children in rural Guatemala gained sponsors this month from a megachurch in southern Indiana.

But in this case, it was the indigenous children in need who pondered photos of smiling faces and chose one they felt a connection with. And it was the adult donors in the United States who nervously waited, wondering who would pick them.

World Vision explained that the goal of this switch ‘is to empower children, letting them make the first of many choices during their sponsorship’. It’s the latest in decades of adjustments to child sponsorship – an approach to development that has been praised for transforming lives but also criticised for exploiting children or simplifying complex issues of development. This new model, aptly named ‘Chosen’, is a positive step for two reasons.

Firstly and most obviously, it’s a reversal of the usual power relationship. Guatemalan children experiencing poverty and disadvantage are being given a choice of who will support them. They are no longer passive recipients but active decision-makers. At the other end, the potential sponsors in the US are experiencing some of the sense of anticipation and vulnerability that the children would normally experience.

Secondly, it’s a subversion of the individualistic model of sponsorship. The children in the community gather for a ‘choosing party’ – ‘a celebration where the kids choose their sponsors’. You can just imagine the fun these kids have when looking at photos of American churchgoers together, commenting on their smiles or the colour of their hair, wondering what kinds of houses they live in, and then celebrating their new relationships.

There’s a lot we can learn from World Vision’s model. What would it look like to reverse the power relationship in our own communities, organisations and relationships? How can we make sure that those who receive our help have a greater say?

I think ‘Chosen’ is a great first step. But I’m still not comfortable with the word ‘empowerment’. Craig Greenfeld writes that:

‘Chosen’ still leaves the children in Guatemala vulnerable. While they are now able to choose who sponsors them, they are not involved in shaping what the sponsorship program looks like. They are still not equal partners with the sponsors, but recipients of their help.

Of course kids will always be dependent to some extent, but what would it look like for these sponsor children to move from ‘empowerment’ to ‘ownership’? And how would this look in our own communities, organisations and relationships?