God who is with us: A reflection on the cross and a busted hot water tank. 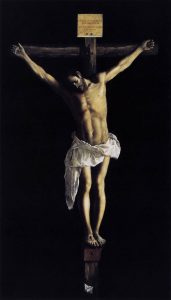 Late at night my hot water tank blew up and so a plumber had to come at 2am Good Friday morning to take a look at it. It’s not exactly how I wanted Holy week to start off. A near disaster was avoided but it still left me stressed and annoyed that already early into the week, my plans were not going my way.

I love Easter. It’s a season when I look forward to God revealing something new. It sounds like magic, but I expect that God will show me something special about the beauty of God’s reign that week. Taking time to explore the humility of Jesus on Maundy Thursday, his sacrifice on Good Friday, the liminal space of Holy Saturday and the exuberance of Sunday is one of my favourite things. How could God not speak at this wonderful time in the Christian calendar? So the fact that something had happened to upset that sense of expectation grated on me.

But it’s through the disruptions that God speaks most clearly.

As I begrudgingly started to go through all of the rituals of Holy week determined to “experience God” no matter what, slowly I realised, the incident with the hot water tank was becoming a sign, an indication of deeper things that were going on in my life.

Sitting in a church where a young preacher was speaking a fairly standard Good Friday message from the Gospel of Luke, what was slowly beginning to be highlighted in my mind was the expectation of some who stood at the foot of the cross gawking at the crucified Jesus.

Some of those onlookers mocked Jesus telling him to save himself and others. People expected Jesus to save himself from the cross. Literally, they wanted Jesus to get himself off that disgusting torture implement, clean himself up and crush those who had abused him. Then he would prove he was a real king.

That’s the kind of Messiah they were imagining. One that would escape suffering, trials, and bring his people back to a posture of power. Perhaps then God’s people would be rulers instead of subjects, powerful instead of weak and they would of course rule with wisdom and  righteousness. That was the prevailing assumption of how the kingdom would come.

This thought and the relatively trivial issue of a hot water tank blowing up in the middle of the night, made me think about some deeper struggles in my life that simply will not go away even though I ask God to crush and rip them from me or heal me. But there is often no deliverance, “God who rescues” does not show up. I want out but it doesn’t happen. God can rescue us of course. He can spare us from trials, suffering and pain. But if we look at the cross, at Jesus’ deepest point of need, he was not given a way out of his trial.

Instead Jesus revealed something else. Jesus went through the pain rather than “conquering” it and trusted that God would be present, show love and bring transformation at the right time. And in this way, Jesus modelled for us an alternate view of power.  Jesus went deeper to confront, undermine, deconstruct worldly powers and reveal the real wisdom of what true power looks like. Jesus didn’t assert himself in life or on the cross, he relied on our hospitality, and made himself vulnerable enough to need our help. Instead of showmanship, Jesus became one of the dregs of society. Rather than coming off the cross unscathed, unaffected and clean, he got messed up, experienced real hurt physically, spiritually and emotionally and he died.

This challenges me at the core of how I see God. “God who rescues” becomes “God who is with me”. At a deeper level than deliverance from my trial, God often comes and touches me lightly enough to feel and absorb the depth of the revelation being given to me.  As I go through my struggle, I can experience victory not by conquering the pain and difficulty, but by trusting God through it, experiencing his presence, power, love and strength. I come out of that experience changed. I am not left unscarred, because I think scars last forever in the kingdom, but deeply transformed.

The difference between Jesus and us is that his suffering and trial had a purpose. Through his death and resurrection the world gets a chance at life, peace, beauty and reconciliation. However, with us, sometimes the suffering we experience in life has no purpose, it’s just the horrible stuff of life that happens and we get caught up in it. One moment we might be merrily moving along in life and the next we could be in hospital or in pain, suffering depression, loneliness, homelessness. Sometimes our suffering is just the result of living in a broken world.

That’s when we turn to “God who is with us” rather than a “God who rescues”. As we turn to the former rather than the latter, we are changed forever, we encounter the God who never leaves us, is for us and brings us the revelations, encounters and transformations that we may not even know we longed for or needed. We then become people who are more ready to share that love with our desperate world.

And God does this sometimes even in and through the disruptions and disturbances of the mundane stuff of life like a busted hot water tank.